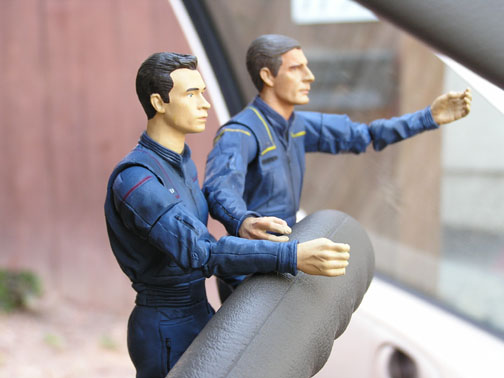 "Straight and steady, Trip. Let's see what's out there."

Trip: Uhh, don'tcha think it's kinda weird they're makin' us drive a float at our own welcome-back-to-earth parade? I mean, y'don't think Starfleet Academy could've spared a cadet or two to do the drivin'?

Archer: Oh, stop complaining. Tell me what you think of my "parade wave."

Trip: This baby reminds me of my first car. 'cept mine wasn't so big. Much better gas mileage.

Archer: By the way. How'd your hair get to be so dark?

Trip: All those months on the ship, no sun.

Trip: No. Ah walked into the Armory while Malcolm was target practicing with his new phase pistols. Parted m'hair right down the middle. This's all we had available. Gotta wear this damn thing until m'hair grows back.

Archer: Oh. I thought it was residual pregnancy hormones.

Trip< I don't know about you, but I,m kinda embarrassed about waving like this. I can't open my hand, I guess I've hurt it somehow,anyway I'm getting some angry glares from the crowd.
Jon< Me to, although I don't quite understand the hand gestures we're getting back

"Did you ever get the feeling we were being watched?"

Trip and Jon learn that Anya was right - you can steer by just using emphatic hand gestures!

I saw the Queen wave like this. On some old historical video from the 20th century, I think...