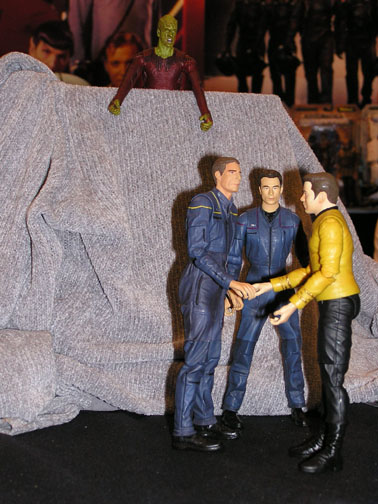 Kirk: So, Captain, seeing much action these days? Cause, you know, I can offer you some pointers, if you're interested...

Trip: Really? What kind of pointers?

Jon: You know, Captain Kirk, I always pictured you as larger than life.

Kirk: I think I could say the same thing about you, Captain Archer. (seductive wink)

Trip: Hey, waitaminute! That's my boyfriend you're getting fresh with. Hands off!

Jon: Don't worry, Trip. I've heard through the grapevine that the captain here is already spoken for.

Kirk: (grinning as his gaze turns and then nods his head towards a dark-haired being with pointed ears who is approaching them) So true. I've been wanting to introduce you to my first officer *and* lover, Mr. Spock.

Jon: So you have to have a Vulcan on your ship too?

Kirk: He's not that bad... Bones gives him a hard time but he's one of my closest friends.

Trip: What universe are YOU from buddy!

Trip: Nevermind... so uh Kirk... how did you get the chance to sleep with so many women?

Kirk: Come with me my young friend... come with me! You to Archer, lord knows you need to get laid!