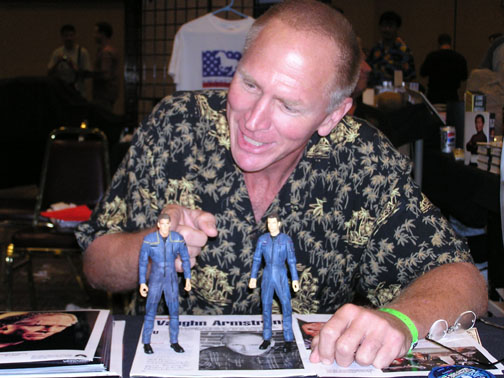 Admiral Forrest: "Jonathan, I told you not to screw this up!"

(Vaughn Armstrong is a great guy!)

He is, but didn't he enjoy bawling the boys out just a little too much? ;)

Mama Forrest: Jonathan! I told you this guy doesn't deserve you! I will not have you throwing yourself away on some two-bit engineer. Now come with me, there's a very nice doctor I'd like you to meet...Julian is his name...

Trip *hisses*: Oh, God, Jon why didn't you tell me your mother was going to be here?

Jon *hisses back*: He told me he was going to New York for the weekend!

I'm the admiral, dammit! I tell you what to do! Cross me, Jon Archer, and I'll knock you on your face! *pokes him in the head anyway, knocking him over* Know my wrath!

On Archer and Tucker's weekend off to Risa they find the Admiral wearing a shirt uglier than Trip's!

Admiral: Jon! What are you doing here?

After being poked on his head....

Trip: Hey don't touch him. Touch him again an' we'll have to take this outside!

Admiral: Bring it on shorty....