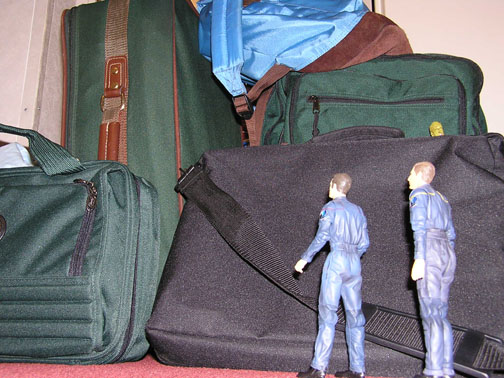 "Trip, just how many shirts did you buy?"

Jon: In MY day, if the airline lost your luggage, they were the ones who looked for it...

Trip: Man, the least she could do is help us move all this crap.

Archer: How can a Vulcan need so much luggage, anyway? Just how many new catsuits did she get at Expanse-Mart?

Trip: Malcolm's gonna have a FIELD DAY doing security checks on this stuff.

Jon: Okay Malcolm beam them up!!!! Trip that's the last time I EVER go shopping with you!

Trip: Hey you didn't complain when I bought you that red speedo now did ya!

Jon: My bag is in there somewhere....

Trip: Have fun tryin' to find it.