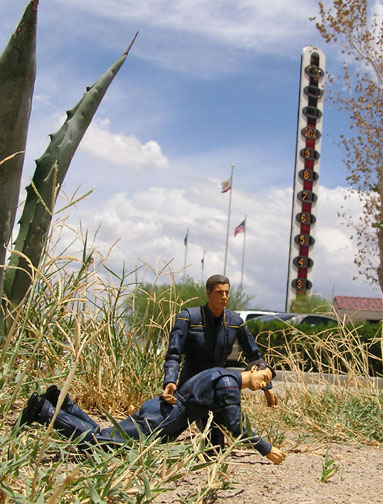 "I still think this isn't quite the right place for us to chance it." Jon said, looking up at the nearby road.

"How about we go across the hotel instead, I'll let you wear a hawaiian shirt for a few minutes." Jon offered.

Trip: *groans* I knew them 99 cent shrimp cocktails were too good to be true!

"Jeez, Jonny, I told ya I hate deserts."

"Come on, Trip. Just a little further. There'll be a banquet."

Jon: "Not heatstroke again! You've got a fever, Trip. I don't know how high. Now if I only had a thermometer..."

Archer "I said take us to Bakersfield, Not Baker!"
Trip "Baker, Bakersfield... Geez, you are never happy!"

Get down! There are collectors about!

Trip: This is a strange place to be takin' medical lessons, Cap'n.
Archer: Just cough, Commander.