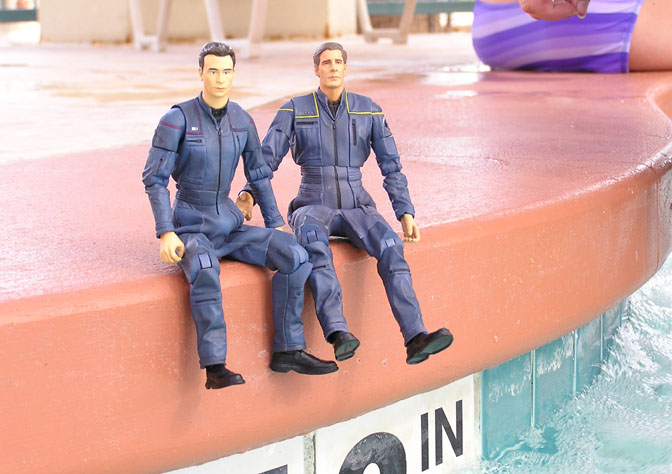 That's definitely a "she."

Jon: (thinking to himself) 'Okay...if I just give him a little shove here on the butt, I'll have to dive in after him. And maybe, just maybe, I'll need to pull off his uniform so I can haul him out of the water. And, oh, wouldn't it be something if I had to give him mouth-to-mouth? Well, not that I want him hurt. But he does get himself into trouble nearly every time he's on shoreleave. And I've always wanted to get him in a firm lip-lock. Yeah, push him off the deep end. I'll be there to save you, baby...even if you want to slug me afterwards for pushing you in.'

Trip: My God, that man's Speedo is practically hypnotic...

Jon: You know, I just had a revelation. Water polo is boring and incomprehensible and does nothing to assert my masculinity! I'm taking up Greco-Roman wrestling!

Jon: You see that women?

Jon: She's been stalking me all day, and calling me Sexy, or Sexy Bootie...

Trip: I can't beleive I spent most of my vacation stuck to a fat womens ass...

Jon: Well, it wasn't that bad. We did get good seats for that play.

Trip: Yeah, we were watching the damn seat, and listening to the play...